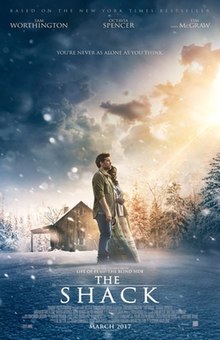 The Shack is a 2017 American Christian Drama film based on the 2007 book The Shack written by William P. Young. It was received negatively by Christians and critics alike.

In The Shack, Mackenzie “Mack” Phillips was abused frequently by his drunken father, alongside his mother. His father was an elder in a church. After having an emotional breakdown in church and confessing infront of everyone what his father was doing, his father beats him well into the night, forcing him to quote Scriptures.

Mack poisons his father and years later marries a strong Christian woman called Nan and they have three children – Kate, Josh, and Missy. Missy is five or six, but asks a lot of really hard questions, especially about God, often leaving her family fumbling for an answer.

One day, Mack takes his kids for a road trip. They stop at a camp for a few days. As they’re packing up to leave, Missy is kidnapped, molested and killed.

One year later, the rest of the family is strained and hurting – especially Mack and Kate, who blames herself for Missy’s death. Mack receives a type-written note, asking him to come to the Shack, where they discovered Missy’s blood soaked dress. Thinking that it’s the killer and it’s his chance to kill him, Mack goes to the Shack, but doesn’t find the killer. Instead, he meets three people who introduce themselves as God or “Papa”, Sarayu (the Holy Spirit), and Jesus, who are there to help him understand his life, Missy’s death, and how to move on.

This film was very negatively received by Christians, who call it heretical and such. While people have praised it for it’s emotional weight and trying to answer the question of “If God’s real, why is there evil and suffering in the world?”, several claims have arisen about it’s heretical theology.

It is unbiblical, according to Christians, that God appears as three human beings. Sure, they agree that Jesus came to earth in human form, but “God and the Holy Spirit never appeared in human form AT ALL.”

Well, their claim is utterly unbiblical. May I remind you of Abraham, when three strangers came to him to tell him that Sarah would have a son? GOD APPEARED TO HIM AS A HUMAN!!! There were two others, who I think might be the Holy Spirit and Jesus, though it’s not made clear who they are. So the claim that God appearing in human form is unbiblical is utter nonsense.

While I don’t agree with the Trinity doctrine, I personally did not have a problem with the brief and one-off mention that they are all One.

Other problems with the film is that God appears in a female form. God is not a female. Um…in the movie, it doesn’t try to say that God is female. God Himself states that He chose to appear in female form BECAUSE HE KNEW THAT MACK COULD NOT HANDLE A FATHER FIGURE AT THE POINT IN TIME!!! He appears to Mack later on in the film as a Father, when Mack can handle it, but otherwise, He chooses to appear as a female. What’s wrong with that? Who are we to tell God that He cannot do so if He chose to appear as a female? He has limitless power and can do anything!!! He could come to earth in the form of a dog if He chose to do so!

People claim that it’s trying to insinuate that God cannot be loving in a male form. Excuse me? It’s not. If you were in Mack’s shoes, and your little child was kidnapped and killed by a man and you harbored a deep hate towards said murderer, do you think you could handle God appearing to you in the form of a man? He appears as a female because He knew that that was what Mack could handle at the moment. Also, please read this post by jmshistorycorner regarding a similar issue: https://jmshistorycorner.wordpress.com/2018/05/20/biblical-genders/.

Another theology problem is that at one point during the film, God shows Mack crucifixion scars on His wrists to show Mack that He too suffered alongside Jesus. The claim is that it implies that God incarnated and was on the cross as well, when the Bible says that it is was only Jesus and the two crooks on the cross. It DOES NOT imply that at all! In that scene, Mack was questioning God on why He allowed Missy and Jesus to both die, saying that He didn’t care basically. The point of the scars on God’s wrists wasn’t to say that God died on the cross as well, but to demonstrate to Mack that He too feels our pain and suffering, that He never leaves us and can be hard on Him too.

Another theological problem in The Shack is its implicit suggestion that Christian beliefs about the nature of God are irrelevant to true faith. In a conversation with Mack about Christianity the character of Jesus denigrates religion and remarks, “I don’t care what you call him. I just want to see people changed by knowing Papa.” This sentiment is reminiscent of Shakespeare’s Juliet who muses, “What’s in a name? That which we call a rose by any other name would smell as sweet.” The problem, of course, is that different religions do not simply refer to the same God by different names; rather, they hold different, and in many cases contradictory, beliefs about God’s nature and character. Contrary to what The Shack suggests, people of different faiths do not all have faith in the same God.

Moreover, in Scripture names matter. Names connote character. In fact, God’s name is so important to Him that the third of the Ten Commandments instructs the Israelites, “You shall not take the name of the Lord your God in vain” (Exodus 20:7, ESV). This does not mean that God privileges a particular language’s translation or pronunciation of His name. But to suggest that all religions’ names for God, and the theologies those names connote, are equally valid (or unimportant) is to dishonor God’s holy name.

The movie does not suggest that AT ALL!!! And Jesus’ denigration of MAN MADE religion is absolutely spot on!! We don’t need all those rules – we simply need the Word and God, hearing and obeying Him.

While providing great and solid answers to the problem of evil and suffering, another claim against the movie is that it’s ‘problematic theology detracts’ from its message. What problematic theology? It’s theology is spot on and Biblically accurate. Nothing contradicts the Bible (with the possible exception of the Trinity part). And it does not detract in any way shape or form from it’s message.

The film presents ideas that are shrouded in maybes and not-what-you-think comments, rather than the clear proclamations that God makes about Himself in the Bible. Papa, Jesus, and Sarayu often ask questions back to Mack, challenging the things he believes about them. While this mirrors the technique Jesus often employed in the Gospels, we know that Jesus spoke truth.

Yes, Jesus did speak the truth. He also spoke in riddles.

Another condemnation made against the film:

Papa is equally fond of everyone, regardless of their actions.

Yes, that is Biblical. He loves all of us, even though we do wrong and go our own way. Okay, I’m not sure about the film’s thing about God not punishing people as the Bible does show God punishing people – sometimes severely. But to say that it goes against Scripture to say that God/Papa is equally fond of everyone regardless of actions is false.

On the Cross, God forgave all of humanity, whether they repent or not. Some choose a relationship with Him, but He forgives them all regardless.

Others will be more blunt and claim that this means that God will grant everyone salvation regardless of whether they have come to know God or not. The Shack isn’t trying to say that at all.

In another scene, the Jesus character tells Mack that “religion is way too much work,” and that he wants friends not slaves. He goes on to say that “Christian” is a title he is not crazy about. He only wants all people, regardless of their religious expression, to be changed by Papa and know what it means to be truly loved.

In that scene, Jesus says that He’s not what we call ‘Christian’. He’s not religious – i.e., going to Church every Sunday, following what the Pastor says, etc., etc. He wasn’t saying that anyone of any religion can go to Heaven – He was saying that you don’t need to be following all the Church’s rules to know God.

Then there’s the issue of calling God “Papa”. Why is that a problem? ‘Cause “we don’t find it in the Bible”. Papa means Dad, Father, Abba. God in the Bible is called Father and Papa is just another variation of Father, so there is no ‘unbiblical’ problem here. It’s totally fine.

Now that we’ve established that the accusations against this movie are false, let’s get down to the review itself.

This movie is meant to be upfront, confronting and challenging, and it certainly is. It tries to provide an answer to the question of if God is real, why is there evil, and it does answer it, giving solid answers to it. It also answers some other questions I was having, even though I was following God and loved Him. The answers they gave are in line with Scripture and spot on, solid answers.

It’s emotional, dark, and gritty. There was one brief scene which I thought could be classed as horror and disturbed me, but it was necessary for the message and story line of the film. It’s doesn’t sugarcoat Mack’s internal issues and the huge pain he and his family is in. There is no “unbiblical suggestions” about God’s nature and the uniqueness of Christianity. It’s Biblically solid and sound.

It challenged me on one or two preconceptions I had about God and the Bible which I didn’t even realize I had until I watched the movie.

The acting is excellent and top-notch. The cast really throw themselves into the role.

There’s a scene around the end that has stirred up controversy – where I live, anyway. Mack drives to the Shack on Friday and spends the weekend there, right? At the end, he’s driving back and is hit by a Semi and wakes up in hospital. He is told that he never made it to the Shack as he was hit on Friday as he was heading up to the Shack. It’s never made quite clear how this is possible, except we know that God had a hand in it. Some believe that his experience at the Shack was all while he was unconscious. Others say that he really did go to the Shack and after it was all over, God took him back in time to that point in time when he was about to be hit by the Semi. Another theory is that it’s like the movie Sliding Doors. We simply have no way of knowing which theory is correct and any of them are equally possible. All of them are equally within God’s power to do. We simply won’t know.

There was a problem or two that I had with the film and that is that it only provided closure for Mack and not his family. While Mack definitely needed it the most, I didn’t understand why he didn’t show his family the grave and they did not explain what that ladybug they found after they noticed Missy was missing was all about. Other than that, I thoroughly enjoyed this movie. Great and absolutely recommend it. 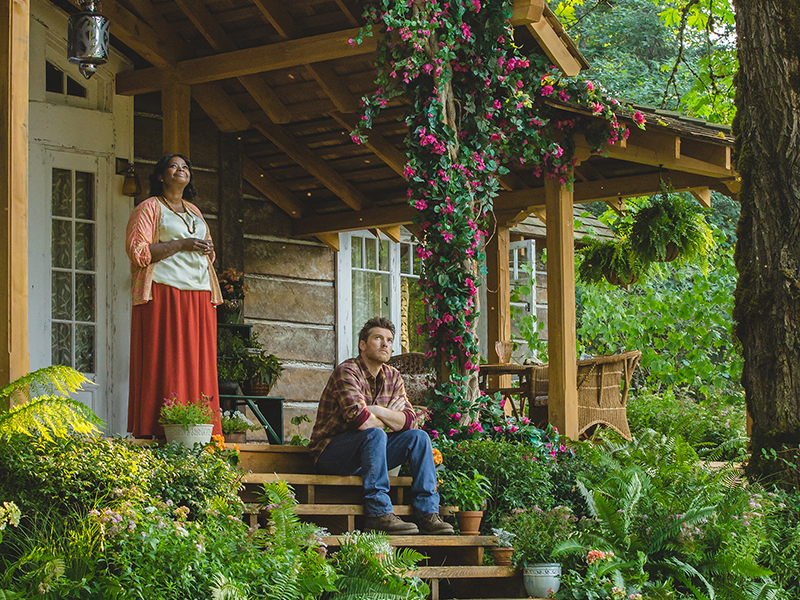